I have arrived in South Africa! I also have spent my first “night” here. Now I say “night” in quotation marks because my body thought it was 6pm when I went to bed at midnight, and I only ended up getting about 3 hours of sleep. I spent the remainder of the morning hours unpacking all my things, reading a book, and thinking about the past day’s events. It was actually quite a nice way to spend my morning. I am wide-awake and bouncing now. Made some tea and did the dishes from last night. Ah yes, last night. Let me tell you all about it my first evening here! 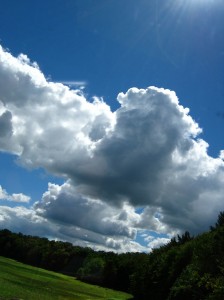 My plane landed about 15 minutes early, so I was able to get through customs with plenty of time to explore the airport while I waited for the Scheepers to pick me up. The moment I spotted Lucas in arrivals looking for me will forever be etched in my memory.  That was when I realized I was truly in South Africa. I received big hugs from both Lucas and his son, Llewellyn, as I tried to contain my excitement, so I wouldn’t do something silly like jump up and down in the middle of the airport. I still want to jump up and down and run around the house like a child because I am so happy to be here! So, we went out to the car where Leona was waiting, and again I got another hug. We loaded up my luggage and the suitcase full of SNUGGLES squares, and we were off to the place I am to call home for the next 9 weeks!

I was given a quick tour of the house, was shown my room, made my bed, freshened up, then headed off to bible class. Due to the time my flight came in, we were a bit late, so I was greeted by all 30+ attendees at once when we walked in. I was a bit nervous about meeting everyone, but was soon put at ease by all the smiling faces and the welcoming applause Lucas initiated when he introduced me. I sat next to a little boy who I think is about 9 years old. To watch his face light up when I asked to sit there made my heart melt. Little did I know how these kids were going to wiggle their way into my heart so quickly. The class, led by Lucas, was on living our life God’s way, not what we think is God’s way. He used the stories of Cain and Abel, and Saul and the battle with the Amalekites as an example of how we need to be aware of how and what we are offering God. We need to make sure we are living completely for God and not letting our good intentions get in the way of doing what God actually wants us to do. Lucas volunteered me to draw sheep during the story of Cain and Abel, since he claimed he is not a good artist. I complied, but tried not to laugh too much when the children all started commenting on my “cloud” sheep, and the one that looked like a lion. That IS what they looked like, though. Hehe. After class, children all wanting hugs and wanting to touch my hair swarmed around me. I picked up a few of the younger ones and twirled them around in the air, and soon there were quite a few others begging me to do the same. I was so touched by all the smiles and love they offered me, and by the quick acceptance and welcome I was given. After class, Lucas and Leona drove many of the attendees to their homes. We arrived back at the Scheepers home around 9:30pm, and visited over cups of hot tea and coffee before heading off to bed. I am very excited about what today has in store!